The reasons for our thinking of the head

For our movement, thinking of the head helps us to deal with inertial force. Since the head is located on the top of the body, it receives an inertial force when the rest of the body moves. It means that the head tends to stay there. If we don’t do anything for it, the head tilts backward a little because of the inertial force. We then need to pull the head to carry it there. In this case both the front and back muscles in the neck will be used excessively. It will also involve the abdominal muscles and the back muscles excessively. If we deal with it precedently (i.e. avoiding the head from tilting backward by using the longus capitis precedently), the head can stay at an adequate position. In this case we don’t have to use both the front and back muscles in the neck so much. We are able to move with recruiting fewer muscles and less muscular tension. We are able to have less limitation of our functions.

We are using the abdominal muscles for most of our activities. We use them mainly for supporting our body and for the activities using our breathing such as speaking, singing, playing wind instruments. We tend to hold our body firmly with using the abdominal muscles excessively. In this case, both the thorax and the head are pulled strongly enough to be moved. Again, if we don’t do it anything precedently for this pull, our head tilts backward and we will need more force to support our head and the body. We thus end up adding excess muscular tension. If we deal with it precedently (i.e. support the head adequately), the head stays at an adequate position and we are possible to move or speak without adding excess muscular tension.

We can use the longus capitis to support the head (see figure below). This muscle is located in the front surface of the cervical spine and attached to the cervical spine and the bottom of the occipital. Although this muscle will seem to be an effective antagonistic muscle for the pull of the sternocleidomastoideus in order to keep the head position, it won’t automatically work so. We need to use it voluntarily. What we need to do to support the head by using it is to turn our head forward or keeping the head from tilting backward. This action corresponds to the direction “the head forward”. By giving the direction “the head forward”, we thus are able to support our head against both inertial force and the pull of the sternocleidomastoideus, and we can keep advantageous condition of the head and the neck. 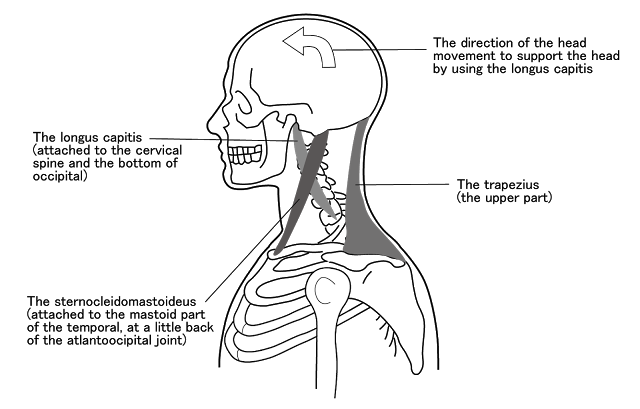 It is actually difficult for us to detect these our habitual response to the pulling force of the head, and most of us are not aware of it. We thus don’t try to deal with it and get used to respond to it ex post facto (not precedently) with excess muscular tension. We are going to deteriorate the quality of our movement and have more burdens on the body habitually and unknowingly. However, we can detect these responses and change them to advantageous ones. To change it we need to manage the position and angle of the head consciously.

These are the reasons for our thinking of the head in activities. It is about how we support our head and in turn how we support our body, and it is about our attention and intention to the way of supporting the body. Somehow FM has realized our typical response as to the head and neck without knowing these mechanism and physics in relation to our body, and he has found how to deal with it. The directions like “to think of the head forward and up” or “to think that the head leads the body” are part of it. There are the kinesiological reasons why we had better think of the head.

I would like to add an alternative direction for the head. I think of the head in movement as “move with my head”. I don’t think “the head leads the body” as a permanent direction. This direction helps when we do some movements to go into upward direction like standing up or jumping up. However, it may give a wrong image when we move our body forward like walking. The head actually don’t lead the body in our walking. Although fishes and four-footed animals seem to do so when they move forward, we human being who adopt the erect bipedalism in walking are different from them. The head and body move forward at the same time. It is enough for us to give attention to the head and think as “move with the head”. This would be a permanent direction of the head for many different activities.

The reasons for thinking of support

Some AT teachers think of the support parts (the parts are contacted with floor or hard objects to rest the body on) while they move in addition to the direction of the head. It also becomes an advantageous direction. I describe its reason. Here I describe it in the case of standing position, and the support parts will be the feet (or the bottom of the feet).

To think of the feet (or the bottom of the feet) helps us to remind where our center of gravity of the body should be on. It works as a reference point for us to align the center of gravity of the body along the direction of a reaction force from floor. We can minimize moment of force by this, and we will have more chances to be in the position possible to release muscular tension for supporting the body. We had better think of not only the head but also the feet to be in an advantageous postural alignment.

As I mentioned previously, we tend to hold our body too firmly with excess muscular tension in movement. This excess muscular tension is caused through the activity of supporting the body. To release it we need to change our way of supporting the body. To think of the support part will be an effective attention to change it to the advantageous one. In practice I recommend people to think of the feet and think as “place the weight of the body on the feet” or “place the whole body on the feet”. We also had better think as “move while the feet keep stopped” in order to utilize force of friction effectively. I call this way of movement intention “anchoring”, because it resembles the mechanism of an anchor as an anchor encourages stabilizing a ship through its stop at the bottom of the sea by its weight.

As to the order to give for these directions, I think of my feet (the support part) first. Then, I think of my head right after. It is always better for us to have a reference point to get reaction force from floor and to remind of getting friction, before we make our head up or before we move.

Hi, I am Paul Aoki and a certified AT teacher. I give lessons in my own studio called “Miwaza Lesson” in Tokyo, Osaka, and Nagoya. I have taught the AT since 2010 and live with just teaching it. I teach the AT with my original approach, which is quite effective. I share this approach in this blog site. More profile is here.